As I’ve mentioned before, I would like to try designing some original patterns. I’m interested in shawls, scarves, and 3D items, and may eventually want to try some garment designs when I get really ambitious. But I thought a good way to both increase my skills and to see what it’s like on the other side, was to try out the test knitting process a few times.

For those who don’t know, pattern designers will often ask for volunteers to test knit a new pattern before it’s released, to make sure it doesn’t have any errors or directions that are unclear. Frequently they offer the final edited pattern to the test knitters for free, although some will offer another pattern they have released, yarn from their personal stash, or some other incentive.

For a test knitter to be really helpful to a designer, they have to be willing to contribute some useful feedback, other than, “Nice pattern, didn’t see anything wrong with it”.  While that sounds great, it’s not going to help the designer make a better pattern. But as an aspiring designer I’m also acutely aware of how vulnerable you make yourself by putting your design out there. So I tried to make suggestions in the “room for improvement” vein rather than with a “there’s something wrong” attitude. I don’t want to be discouraging to the designer, but I know if they’re  anything like me they’re going to want to release the best pattern they can.

I just finished a beautiful shawl test knit, a pattern which will hopefully be released in its final form soon, and I will include links to it here as well as my project page on Ravelry with the works in progress pictures as soon as it’s available. It was a lot of fun to knit, right up until I dropped a ton of stitches and ended up having to rip out 19 entire rows (which of course was my fault, not because of the pattern). I also realized after blocking that there was still a noticeable warble in the lace pattern from that area that I will have to go back and fix, so I will probably be showing you the process of radical lace surgery at some point in the near future. 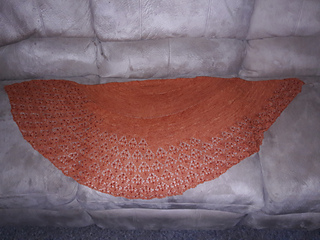 Lace surgery on the Sisterlove Shawl will have to wait until after the holidays, but for now, here is the shawl. It’s a gorgeous pattern, but not really for beginning lace knitters. The pattern is available at http://www.ravelry.com/patterns/library/sisterlove-shawl